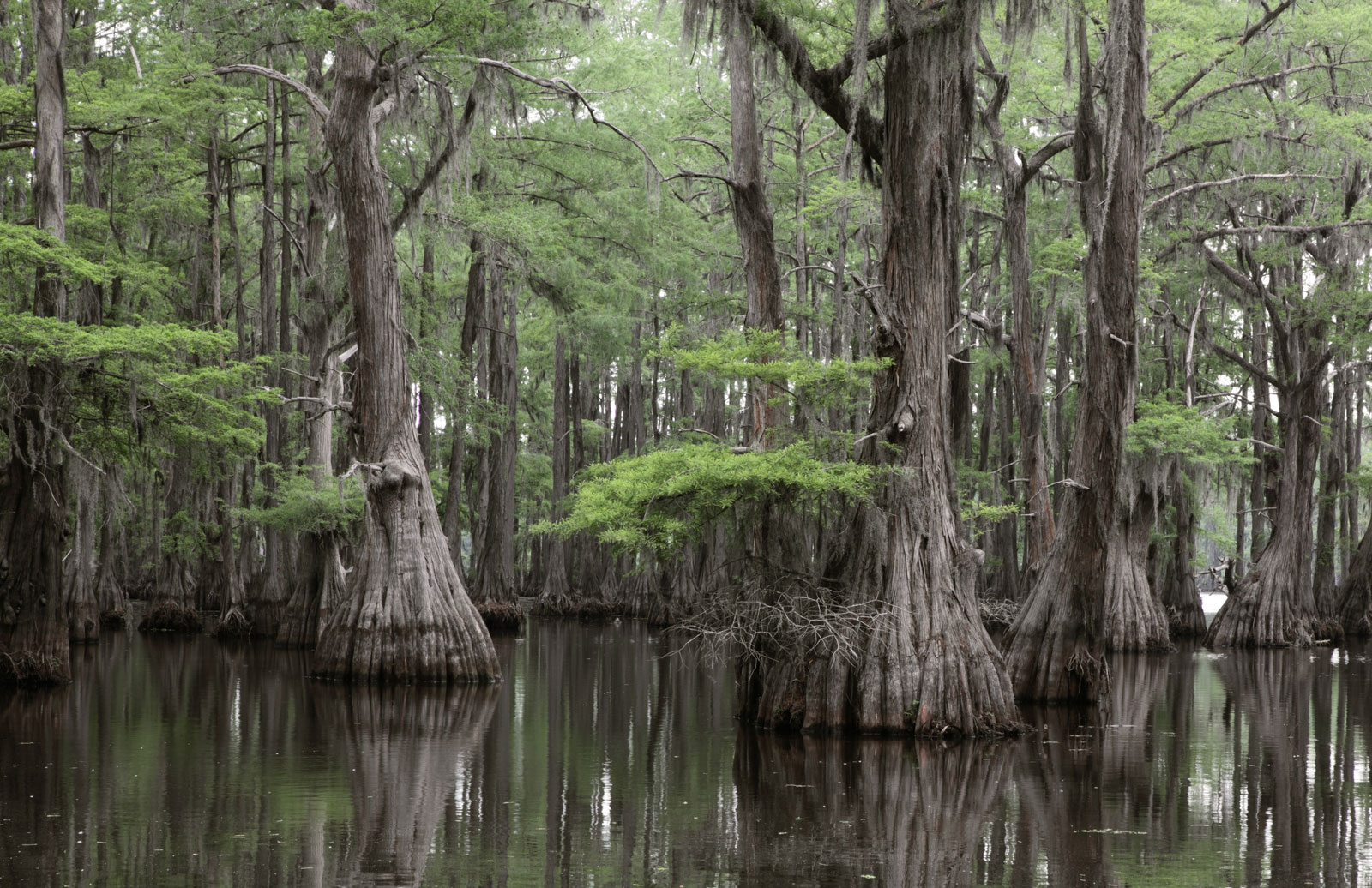 Synthetic biology relies on a plethora of metaphors, analogies, origin stories and science fiction narratives to describe its technical underpinning and utility, as well as its promise for planetary betterment. Depending on who is doing the talking, to whom, and to what end, the field borrows language from fields like computer engineering: “parts” can be “standardised” and “assembled” to create “self replicating machines”. How have language, metaphor, and fiction shaped synthetic biology, and can we find new scripts to generate other meanings? We asked our 2021 residents to investigate how language interacts with technology, and who were able to bring that knowledge to explore meaning in the field of synthetic biology.

Ayana Zaire Cotton is a non-binary, neurodivergent artist, writer and software engineer living in Dawn, Virginia, USA. Understanding there is more that binds these disciplines than separates them, they can best be described as a weaver engaged in a practice of “Sankofa Narration”. Sankofa is a word and symbol of Ghana’s Akan Twi and Fante languages, which translates to "go back and get". Centring a Sankofa sensibility, today they build databases as vessels holding seed data and experiment with shuffling algorithms to spin non-linear narratives to build new stories (worlds) from the “digital waste” of our existing one.

As Ginkgo’s creative in residence, Ayana continued their practice of reverence, remembrance, and worldbuilding using language. Building on their experience constructing generative databases, Ayana collected layers of meaning from the Ginkgo lab and algorithmically wove them into short stories bringing us into the mythology of Cykofa, a place on the North Carolina Black River. ‘Cykofa: The Seeda Origin Story’ is a long-form, speculative fiction, poetry narrative told through the journal entries of a non-binary, biotechnologist, protagonist named Seeda and data found within a 2,600 year-old ancient, bald cypress tree named Cy. Cy, is our narrator — a tree — but also a portal, allowing us to traverse deep time and connections. Through non-linear story telling and algorithmically generated text as the narrative voice of Cy, Ayana explores the question, how might we return to our ecosystems and re-imagine time?

Cykofa becomes a window to a more beautiful, sustainable, and liveable world, using the current material of the world we’re already swimming in: the thinking of afrofuturists and biotechnologists, weavers and poets, braiders and mathematicians. Quilting those sources together and publishing them in a zine, Ayana creates a space where we can all congregate and find each other, “building into a choral hymn of care and curiosity”. 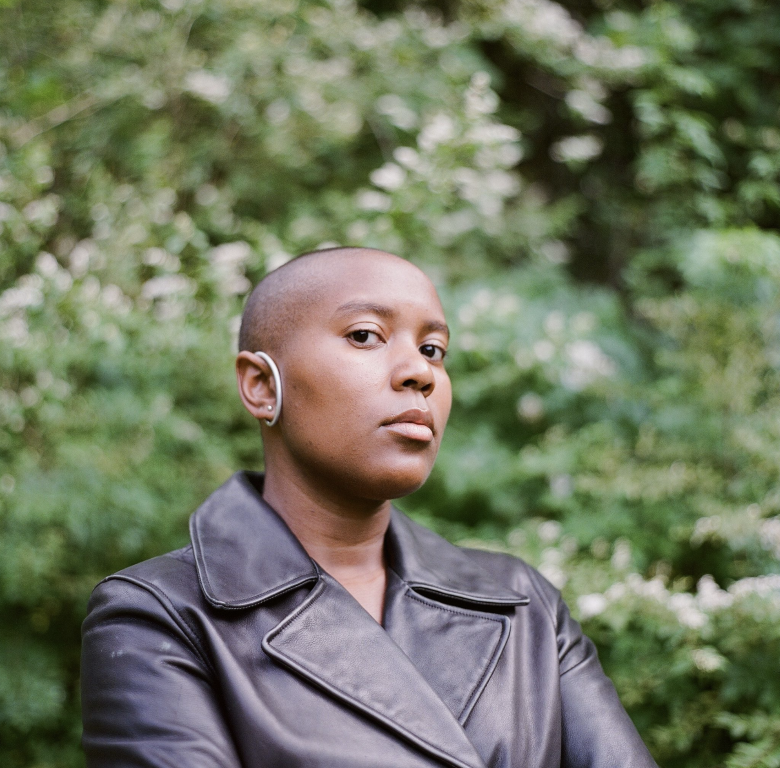 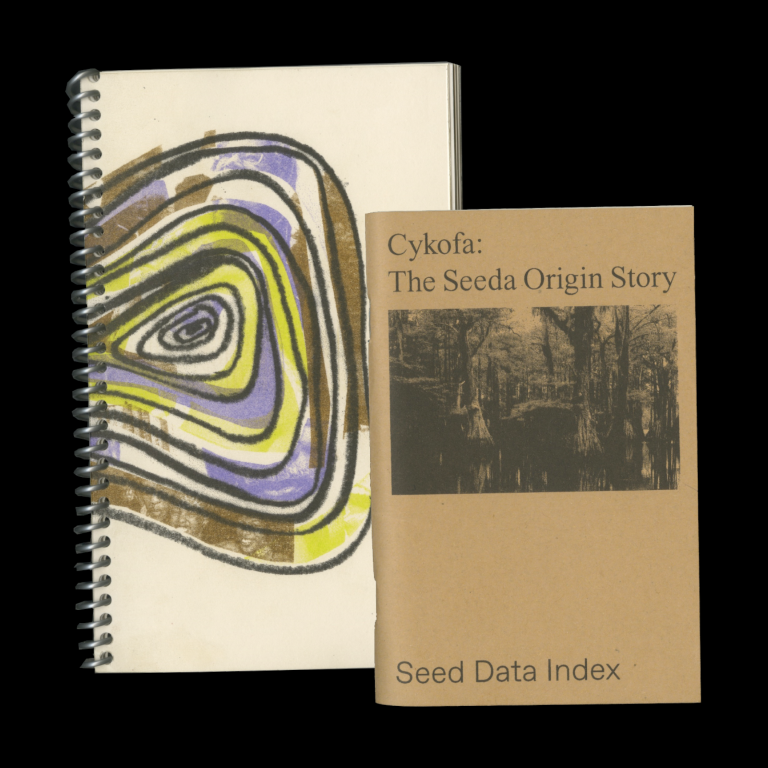 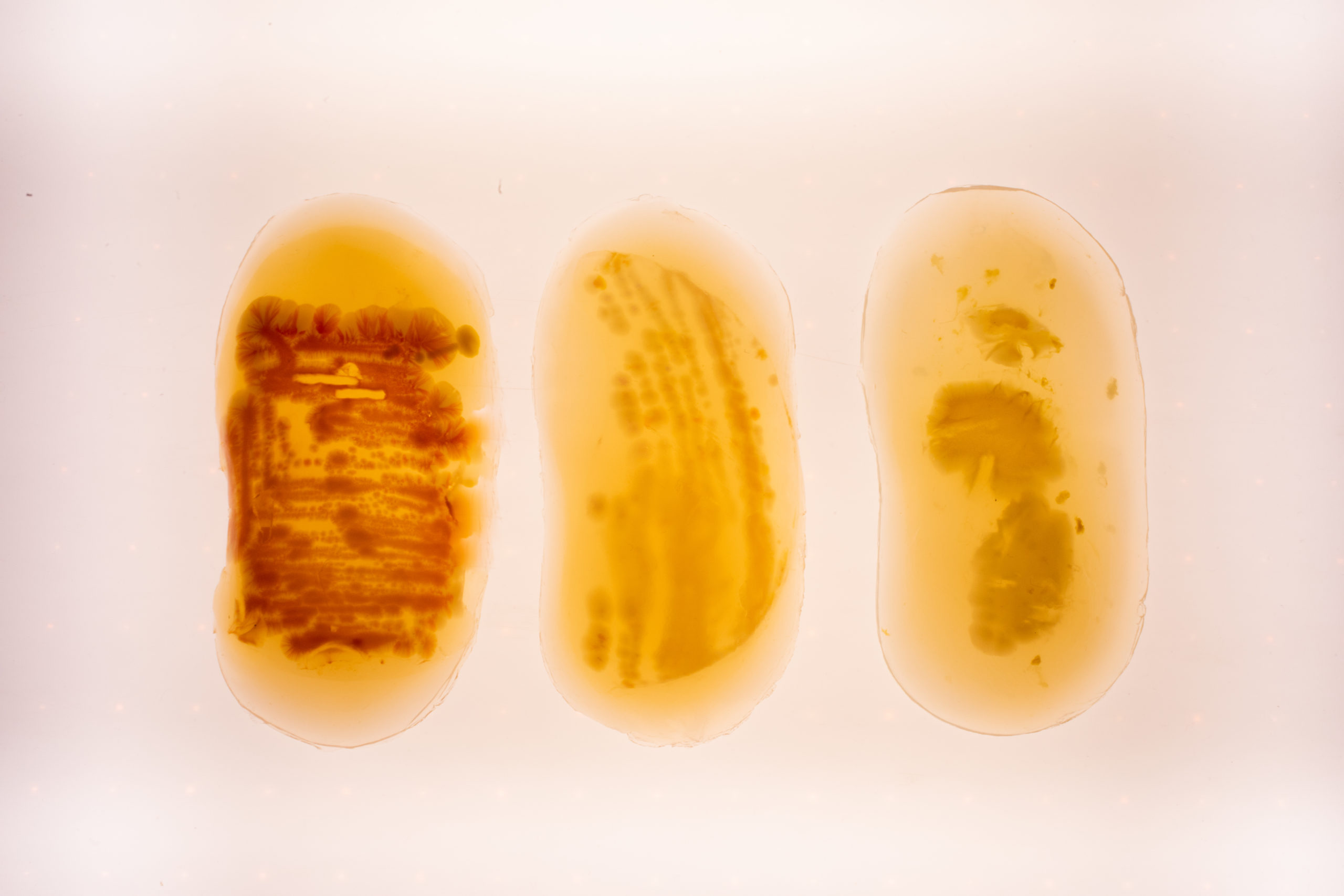 Fields as diverse as architecture, biology, fashion, nanotechnology and beauty, share a startlingly unique, yet obvious common denominator: skin. From the spatial configurations that provide protective barriers from skin, to formulations that aid molecular delivery into skin, technology mediates interplays between the many skins we inhabit. But how do these wonders, insights and capabilities intersect with the subjectivity of the real-world, and between human and non-human life? We asked our 2020 creative residents to expand these imaginaries through the exploration of skin as a biological interface. 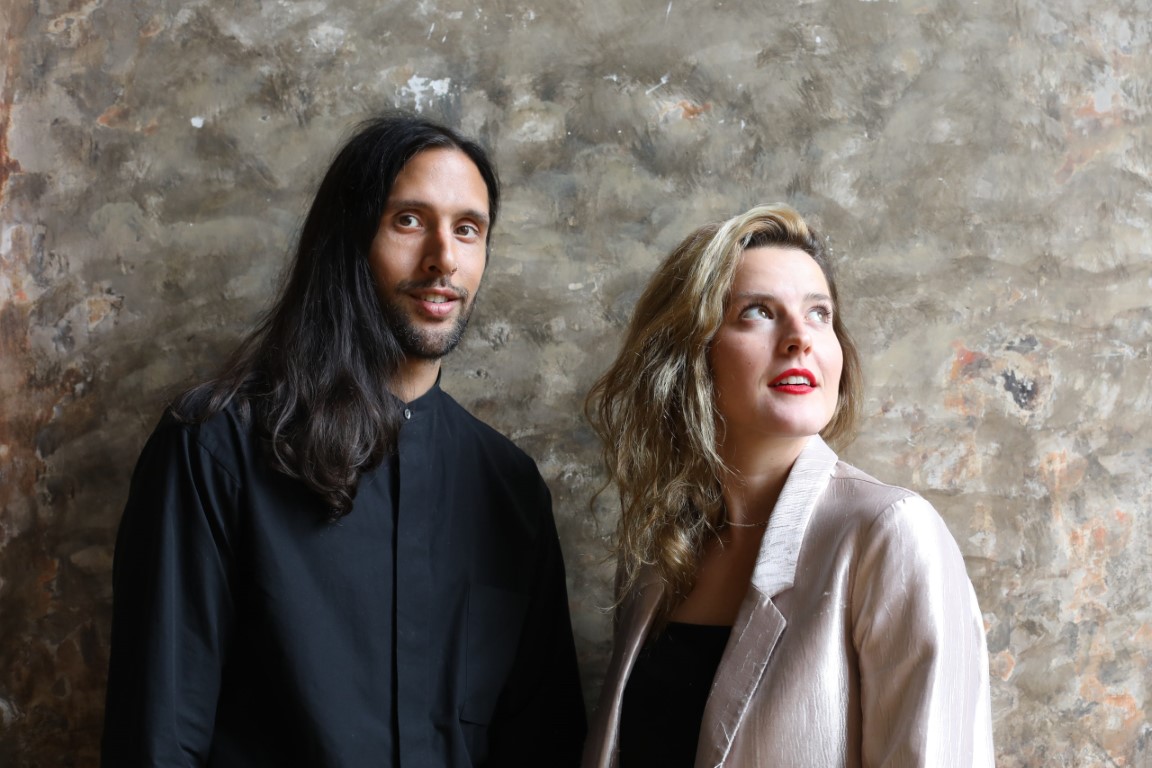 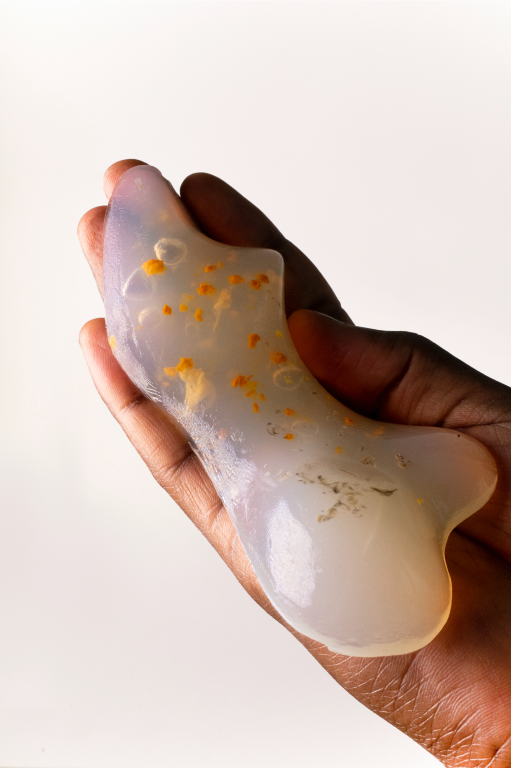 Monika Seyfried and Cyrus Clarke, hailing from Poland and the UK, are interaction and experience designers with backgrounds in art, design and economics. Since 2017 they have collaborated in their practice as a duo to explore alternative relationships with nature and technology and create interactive and immersive experiences that tell stories about possible futures. Their methods blend the fictional and real, using speculative design to research, interrogate, and widen imaginations, whilst grounding themselves in technical realities alongside scientists.

For their residency, Monika and Cyrus were inspired by the interconnectedness of things, living and organic, which they called “Interspecies Gossip”—a guiding metaphor that described the holistic communication occurring and diffusing in living systems, across scales, temporalities, geographies, and between species. Their desire was to create ways for human beings to get back in touch with the “gossip” in natural systems, working with skin as a native technology. They wanted to imagine ways in which we might facilitate communication between species and natural systems, and allow human beings to once again be part of the gossip ecosystem within the biological cloud.

Through “Interspecies Gossip”, Monika and Cyrus developed a science fiction and speculative fantasy experiment exploring the secret tales of the species that live in the home. Working with scientists, artists, designers, and models, they created a book of conversations and rituals between and amongst the multitudes of multispecies that go unheard, unseen and undetected.⁣ This was broken down into three chapters: 1) Initiation, where the reader is invited to work with the skin as a performative site and develop bodily practices to touch the microbial gossip at home 2) Objects of Attraction, where the reader is asked to image objects that can be mated to create new variants, and 3) Immersion, where the participant can step into the world which stretches beyond their own body. Together these different mediums formed a fantasy world; from coming up with new modes of deep remote research to blending fiction and nonfiction writing, creating bodily rituals with artists, filming and capturing spontaneous performances, working in the wet lab, and engaging with 3D CGI graphics. 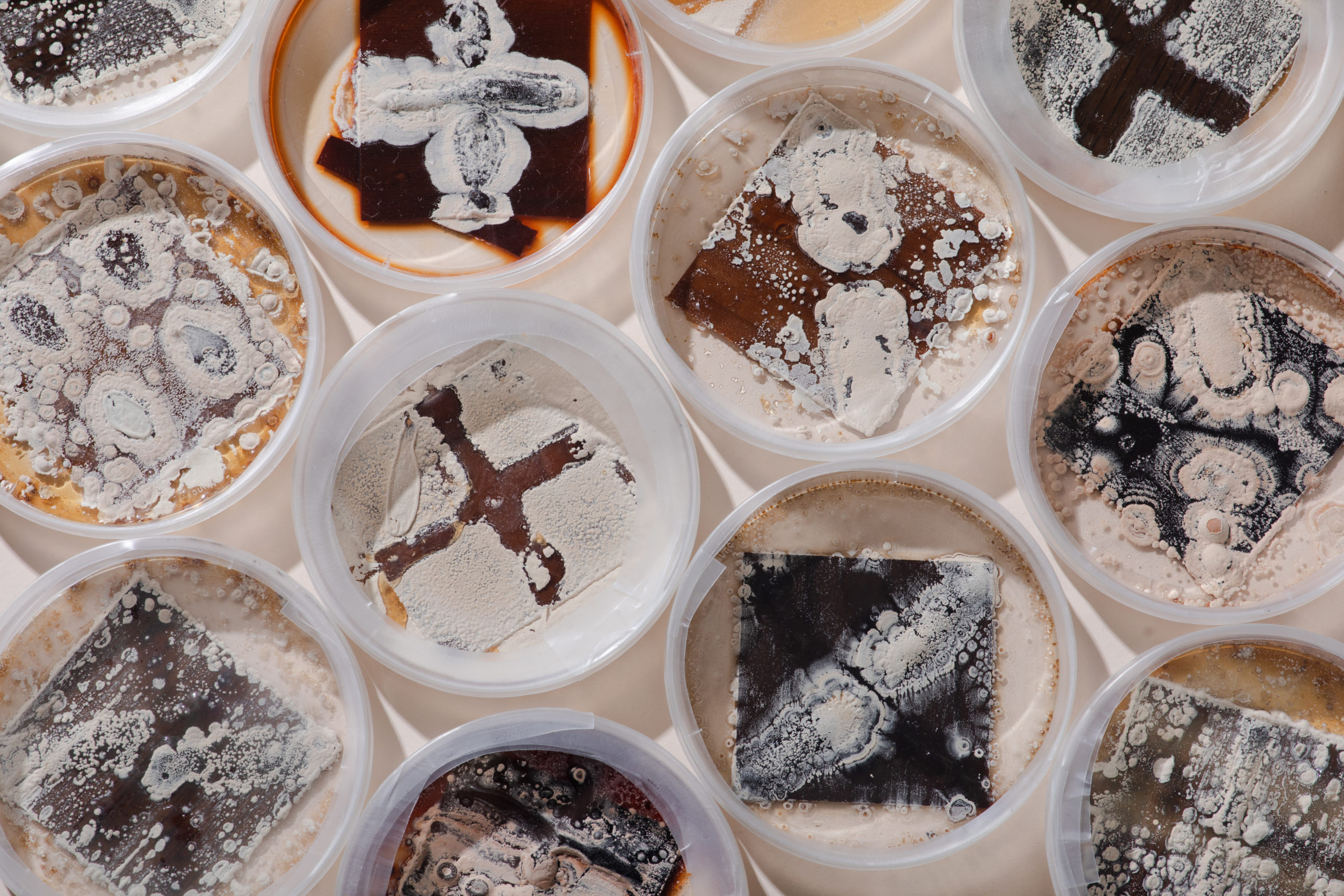 When it comes to waste, nature remains a remarkable teacher. Even in the most complex of ecosystems, biology wastes nothing. How then do we learn from biology to re-design everything? Re-imagining waste might mean designing materials able to transform, industries without pollution, responsible business models, hybrid supply chains, renewable energy systems and economics working within planetary boundaries. From the food we eat to the clothes we wear, we asked our 2019 creative resident to explore the problem of waste through the lens of biology.

Andrea is an architect and artist working at the intersection of design, fabrication, and biology. A maker of process before form, and, in working with autonomous organisms as design partners, Andrea has a special interest in how designers might accommodate variation and agency within the design process and the resulting cultural implications of this accommodation that might arise. Her work, both solo and group, ranges from wearable sculpture to large-scale public art installations with a focus on immersive work that affects the bodily experience and exhibits responsivity.

During her three month residency at Ginkgo, Andrea explored the design of decay, using biology as an agent for material transformation. What if we could design waste that we could live with? What if we could design waste as nature designs it, not just as the result of destruction and breakdown but rather as inputs for renewal and construction? Working with biologically derived and biodegradable polymers such as chitosan, cellulose, and pectin, Andrea focused her research on three main avenues: first, the enzymatic degradation of bioplastics as both a means of transforming material instead of destroying material. Secondly, the usage of different species of Streptomyces bacteria to colonize cellulose and bioplastic substrates in order to transform them. And finally, the investigation of different types of fungi, including Aspergillus niger (black mold) and Trichoderma viride (green mold) in co-cultures to transform and degrade different materials. Through her work, Andrea supported an alternative mode of design practice: where the process of making and breaking things is not only consumptive, but also provisional, and where value is redistributed away from permanent objects onto transient ones. 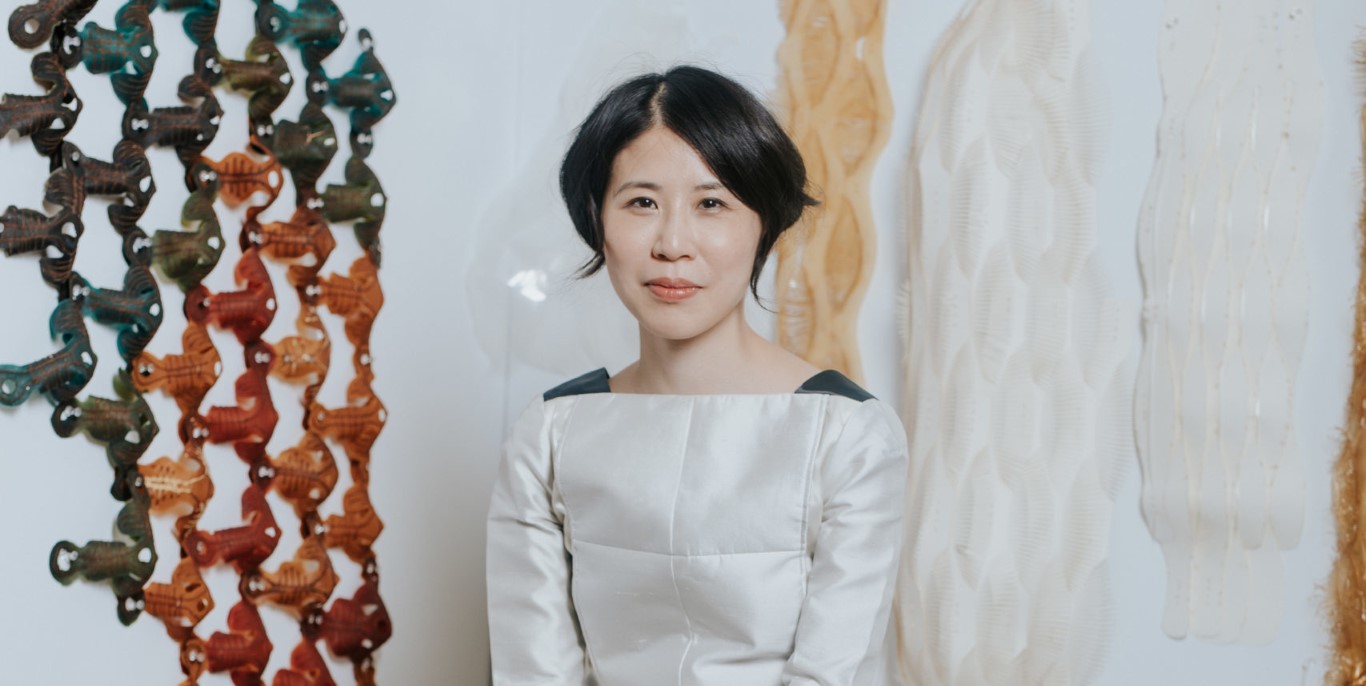 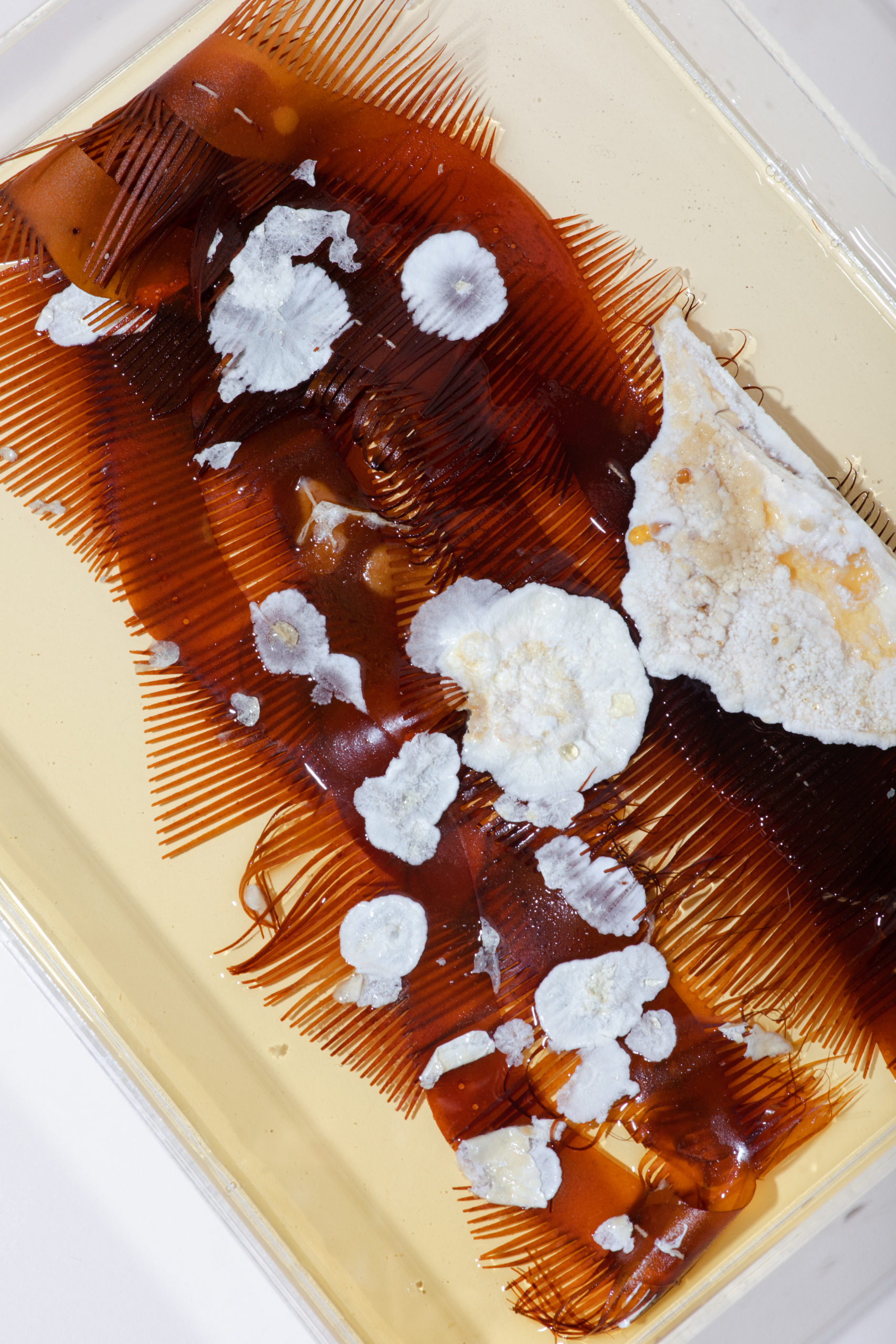 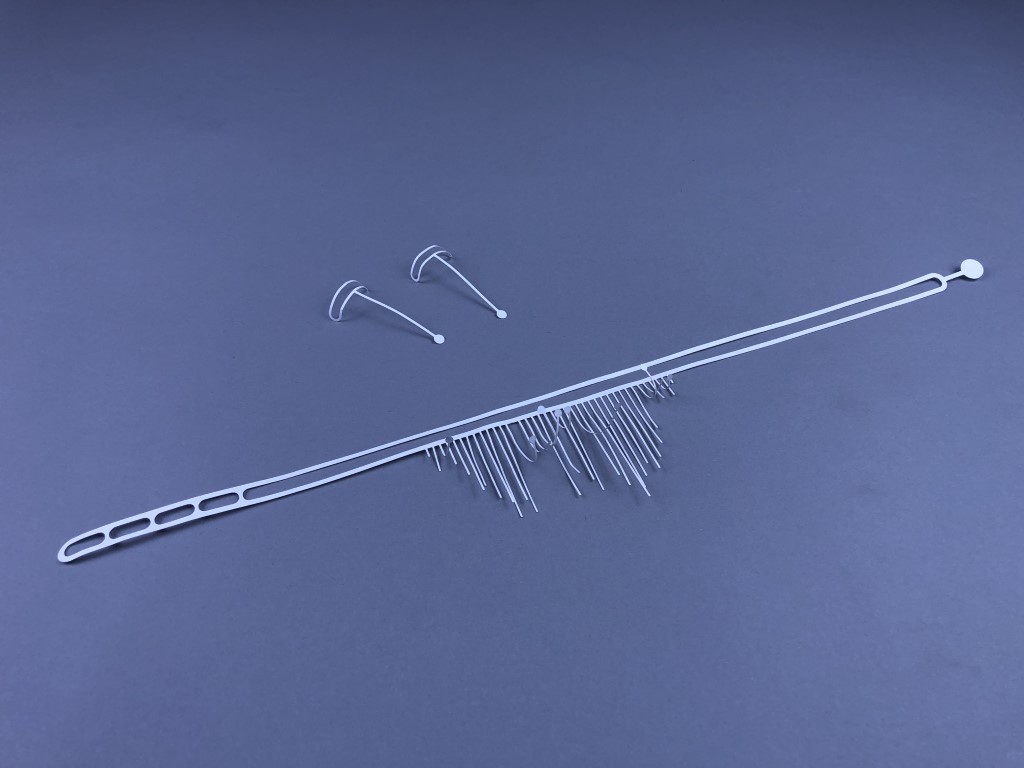 2018 was the first year that we opened up the creative residency to external applications. Unlike subsequent residencies, the 2018 residency was not centered around a theme, but provided an experimental platform to explore both the potential and implications of synthetic biology. 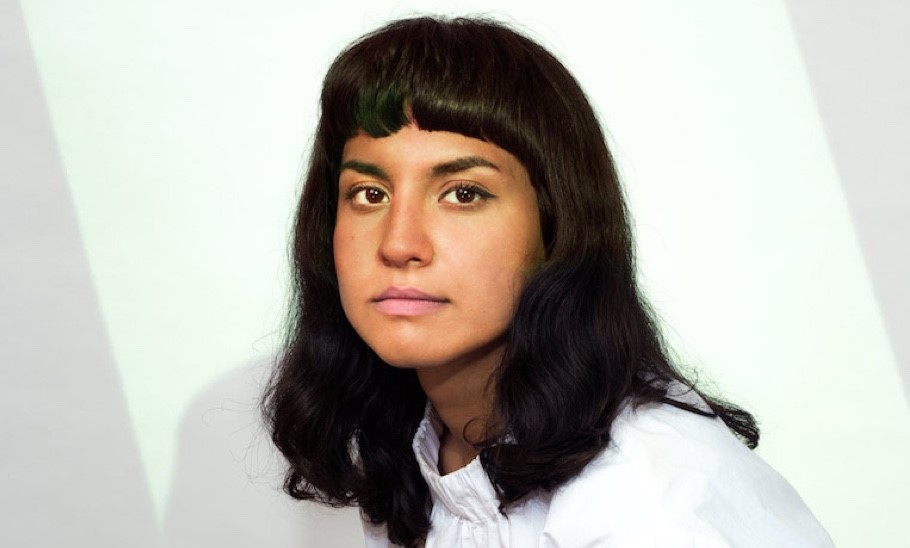 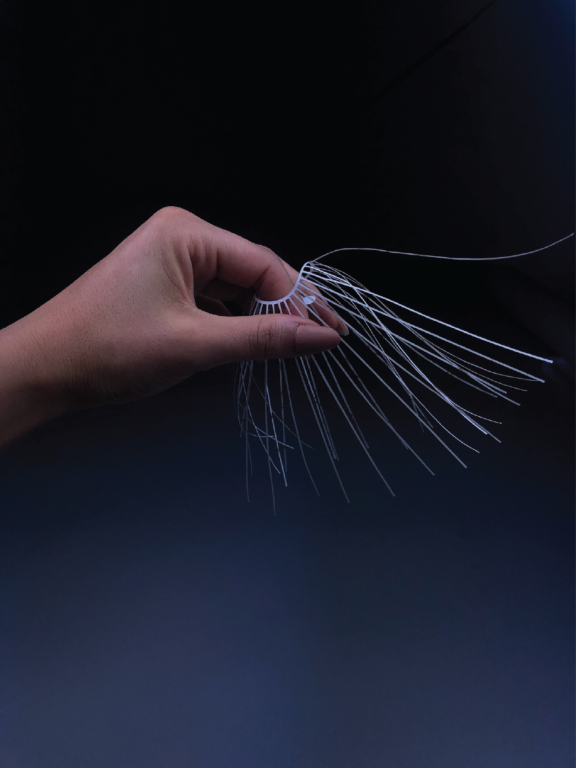 Yasaman is a designer exploring the potential for interactions beyond the visual interface, through augmented and virtual reality, sensory, and other biological systems. Through her work as a Creative Director, Interface Designer and Researcher, Yasaman works with emerging technologies to explore possible and becoming futures. Her investigations focus on the interaction of humans, living things and machines through sensing, simulation and augmentation.

During her time at Ginkgo, Yasaman explored the design of biosensors in synthetic biology and their potential for intersection with human interaction. Having built an anthology of biosensors and compiled a BioDesign Dictionary, Yasaman focused her work on biosensors that can detect chemical molecules. While paper prototypes of physical interactions and interfaces helped her explore ideas, Yasaman wanted to see biosensing in real-time and in action. To do this, she worked with scientists across Ginkgo’s protein design team to design two microorganisms that can communicate with each other. The first is a yeast engineered to produce a sweet smell. The second organism is a strain of E.coli harboring an olfactory biosensor, giving the bacteria the capability to smell — a “nose”, if you will. The smell biosensor would sense the presence of the odor we asked the yeast to produce and produce a blue pigment that signaled the sensing interaction to the human eye. Through her work in the lab as well as a series of workshops, design provocations and prototypes, Yasaman’s work during the Ginkgo Creative Residency asks us to consider biosensing technologies as tools of expression, connection and communication. 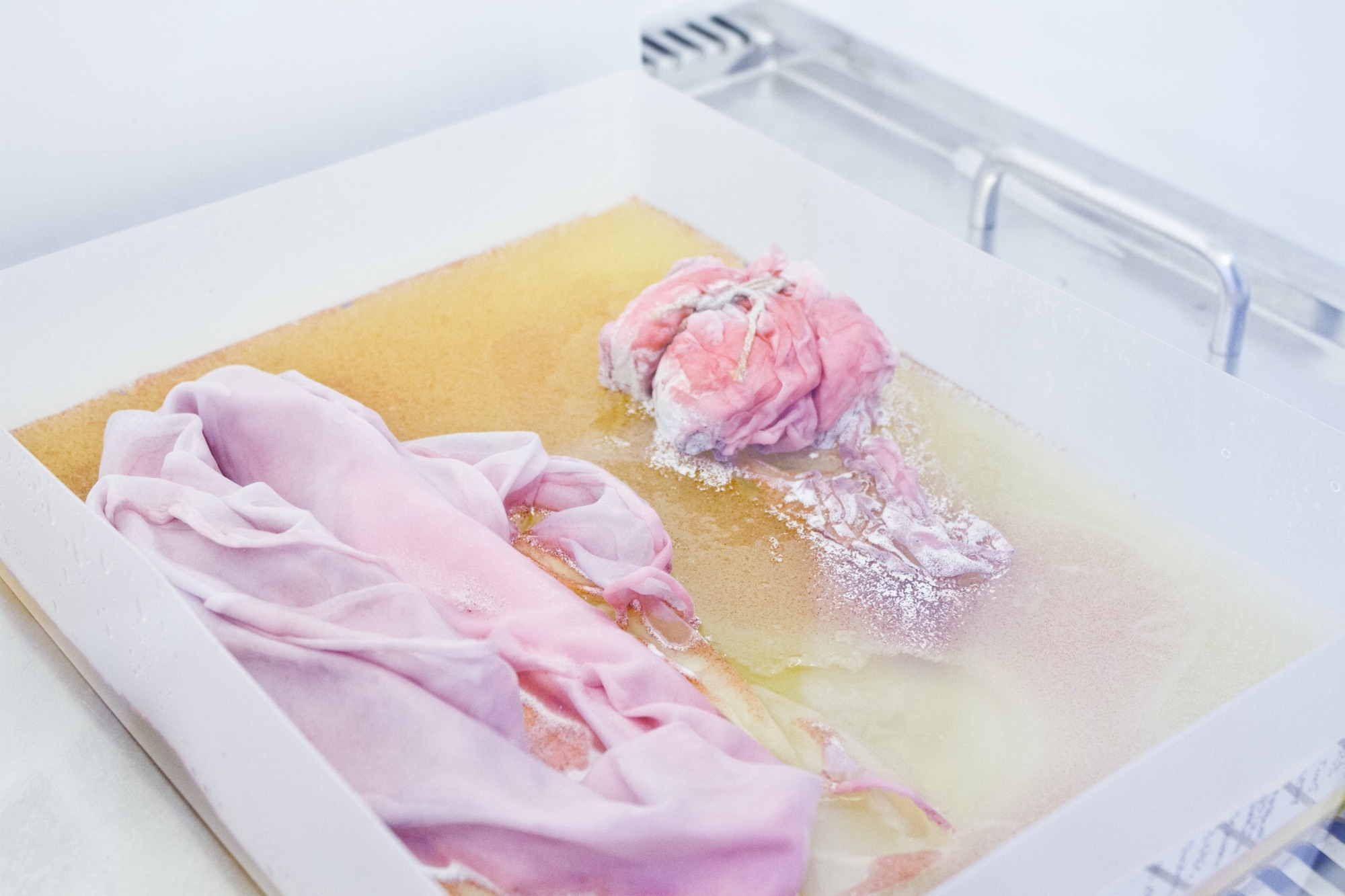 In 2017, we invited Natsai Audrey Chieza to Ginkgo Bioworks for 5 months to explore the possibilities of creative collaboration. During her time, she developed frameworks that would go on to form the Ginkgo Creative Residency.

Natsai Audrey Chieza is founder and CEO at Faber Futures. She is a leading thinker on the transformative role design can play in the equitable development of consumer biotechnology. Over a decade of experimentation, Chieza established novel design-driven processes for bacteria textile colouration, delivering products that not only possess embedded value in themselves, but also demonstrate the viability of new methods and technologies on the wider industrial scale.

As Ginkgo Bioworks’ pilot designer-in-residence, Natsai explored the capabilities of Ginkgo’s foundry to develop custom microbial strains, designing, engineering and building custom tools through digital fabrication to create graphic textile prints, larger-scale textile patterns and a bespoke engineered print for garments. Scale explores how Ginkgo’s infrastructure enables larger lengths of fabric to be dyed. Void focused on designing tools and protocols to produce large-scale engineered prints. Assemblage 001 is the world’s first garment to incorporate bacteria dyes as the basis of its construction. Assemblage 001 marked another step towards a fully customisable dyeing process, and a milestone in the creation of a new resource-efficient biofabrication method for making, coloring, and patterning complex textile products. These three lines of inquiry explore the implications of creating at scale and how it changes the process, outcome, craft, and tools of biology. But collectively, they paved the way for the years to come and demonstrated what a valid approach to introduce creative expertise into the culture at Ginkgo looks like. 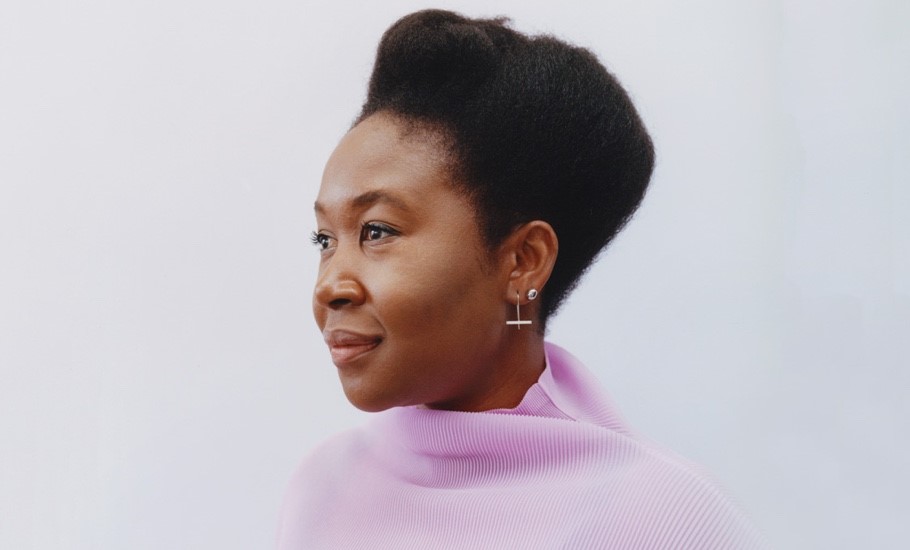 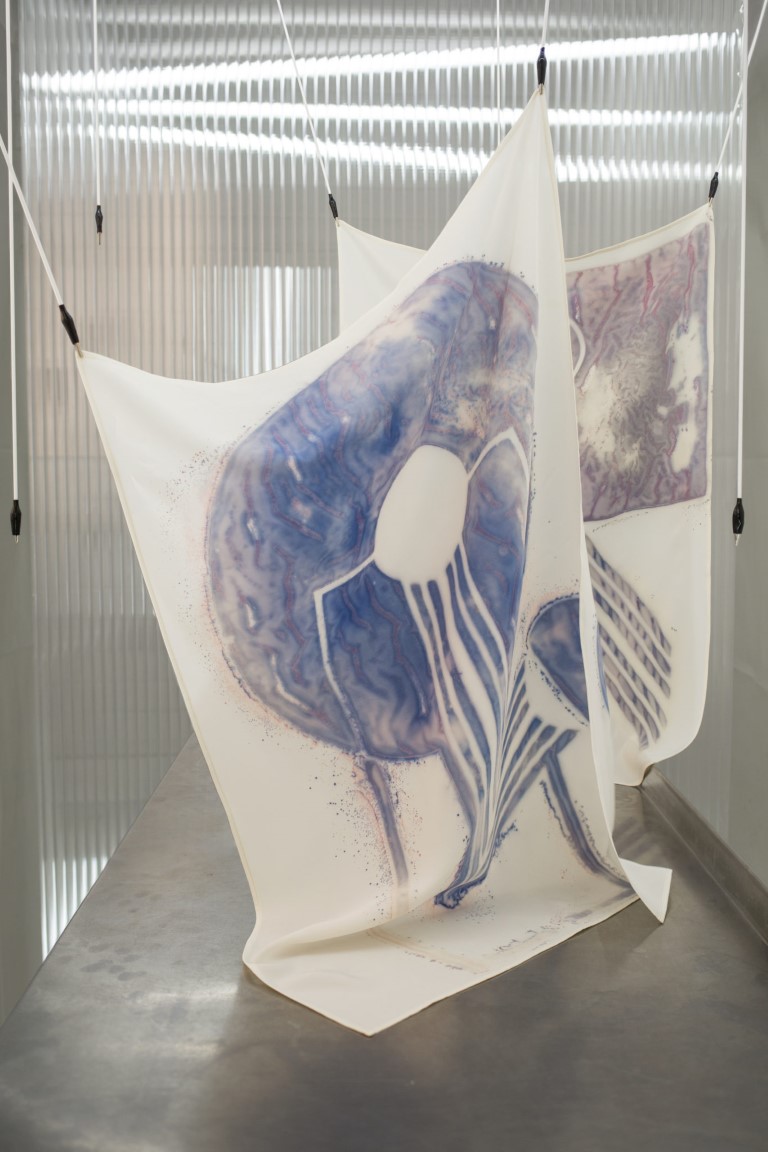